I am not an overly competitive gamer by any stretch of the imagination. That’s why I was so surprised to find myself at the Bowlcut Studios booth time and again playing their breakout game, MageQuit. Currently available for Early Access on Steam, it is a measuring contest of wizarding proportions. This 9v1 top-down brawler has players hurling spells from a staff holding a D20 at one another until only one remains. The more lives a player takes, the more their beard grows; leaving the last wizard standing with a kill count and beard worthy of Saruman himself. I got to experience my first play-through of this couch multiplayer title with the help of the brotherly duo, Brett and Chad Penning.

With 9 rounds total, the first round randomly allows players to choose their spells one at a time. Starting with a primary spell, wizards can start off with a fire, air, water, or earth-type spell based on their preference for long or short range attacks and higher or shorter cooldowns.  I personally started with Gust, because as soon as the match started, I always felt like distancing myself as far from the nine other player chaos as much as possible. This allowed me to gauge their experience with the game, as well as their tactics. If you wanted a more close and personal experience, you could always begin with Rockshot and switch up the element type later on. While the additions and memorization of spells can leave your head spinning in the chaos, the controller layout is displayed before each round to show you the way.

This is the kind of game where you can’t think from start to win, but you have to think from round to round. While the aim of all the players to end with the most kills, the player with the most kills picks their spell last at the end of the round, and those with the least kills pick first.  That means if you end the round with 8 kills and there’s only 2 of a certain spell available, you may have to instantly change your strategy.  So if you want to use Vacuum, and trust me you’re going to want to use it, but someone else grabbed it first, you might just have to settle for a Burning Leash, which is a cool name I guess. Though I did find that there were players who would wait until round four or five to get the spells they wanted, and then swoop in for the win. Though this is the kind of cheap move that people would pick up on and then silently team up on to take them out first.  Out of the many rounds I played, there were small alliances that were created among groups despite this being a deathmatch.

There are seven stages on which to perform your free-for-all, 2 team, or 3 team challenges; though if you only focus on the person in front of you, then you are sure to be the first to die. If nine other people didn’t worry you, then you can focus on the game of the floor is lava you’re about to play if you take to long taking out the other players. That and the giant flaming pools of lava that fly from the center of the stage every once in a while. Basically its a choice between getting thrown into lava, or running away from lava; take your pick.

Though if that’ too boring for you, there’s one map where both sides are open and a line in the middle pushes your or your opponents to a fiery death. If you’ve ever seen Pro-Bending tournaments from The Legend of Korra, it might look a little familiar to you.  Then there’s another Rocket League-esque map in which you attempt to send a fiery puck into the other team’s goal to take them all out at once.  If the idea of your team exploding at your loss wasn’t nerve-wracking enough, you can get hurt by the giant flaming ball if you’re not careful.

DO YOU BELIEVE IN MAGIC?

As much as I joke about the lovable quirkiness of this game, it really is a quality game that I could definitely see players, and myself, coming back to again and again. While there is a multiplayer beta coming out in February, it warms my heart to see a couch co-op where you feel that high strung intensity of the player right next to you. That when someone has an awesome run you can congratulate them from across the aisle, creating the awesome communities most gamers experienced from playing Super Smash Bros. and Mortal Kombat.

Mage Quit was inspired by the Warcraft 3 mod Warlock and was created solely Bowlcut Studios, with Brett handling development and game design and Chad handling art and animation. Only two years into its existence, MageQuit has won “Best in Show” at the Midwest Gaming Convention, GDEX, and was successfully Greenlit on Steam in August of 2016.  The brothers began showing off the game at anime conventions and have slowly moved into presenting it at gaming conventions far from their base of operations in Grand Rapids, Michigan.

Bowlcut Studios is on a mission “to create unforgettable multiplayer experiences that forge or destroy friendships.”  I would say they definitely attained this, both amongst what I saw on the show floor and especially amongst the Gamer Assault Weekly team.

If the soundtrack sounds familiar, it was heavily influenced by Blizzard’s online card game Hearthstone. When I asked Brett about the music’s influences, he told me “I sent our guy the Hearthstone soundtrack, and told him especially to focus on the first few tracks, and said this is the sound I want for this game.” The music was composed by Fat Bard, a musical duo from Missouri who has created music for games like Battle Chef Brigade and Blitz Breaker. 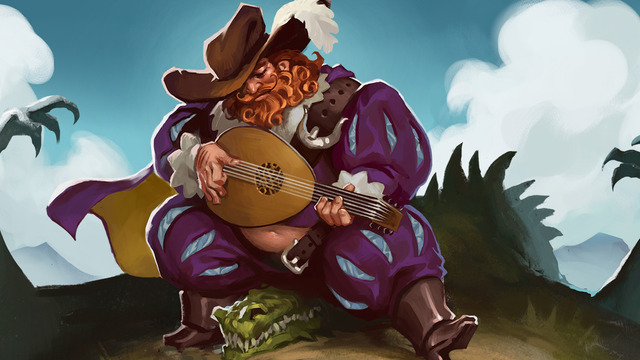 For more news on MageQuit and other indie titles, check out Gamer Assault Weekly.