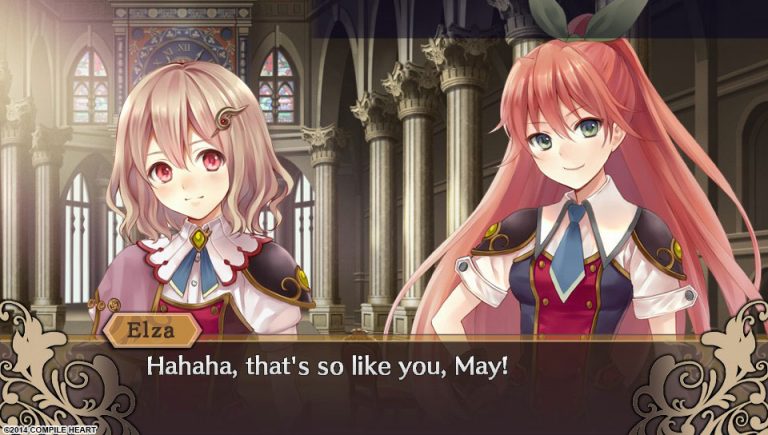 Since Monster Monpiece was announced for release in the West, due to some of its more unique, adult-themed gameplay aspects, this game has attracted much attention from gamers and press alike. While Japanese franchise fans are always looking forward to the next video game series that will make its way across the ocean, almost nobody could have expected this to be one of those games. For the most part, Monster Monpiece is a great game with lots of personalities, but due to its extremely sexual nature, a particular feature can be a bit of a shock for Western gamers. Consequently, the chance people enjoy this game depends on whether or not they can appreciate or at least overlook this particular feature.

Monster Monpiece is an incredibly fascinating game with a fun, innovative battle system and a story that effectively completes the game. The story is a typical anime plot where the main character, a young schoolgirl, is tasked with finding certain items across the country to prevent catastrophic events. While the narrative is nothing deep or groundbreaking, it is still quite enjoyable, providing a nice break from the constant battles.

Using visual novel storytelling in conjunction with the battle system also sets a good pace for Monster Monpiece that doesn’t overwhelm or leave players burned out in the fight. Also, the hand-drawn characters used to tell the story are very well done and provide beautiful aesthetics throughout the game.

Monster Monpiece’s soundtrack and voice acting are another thoroughly enjoyable aspect. Like the story, music is nothing revolutionary, but the tracks help create a very pleasant atmosphere within the game. The wide variety of instrumentals and songs really add much entertainment to the whole experience. The voice acting is especially gratifying. While some people may not like reading subtitles, having a Japanese voice cast is essential for this type of game. There are a quality and charm that comes with listening to a Japanese cast that just doesn’t carry over when Western ports use English-speaking actors. Players can also buy other audio files for character voices with different Japanese dialects or entertaining character styles. While not necessary, this can be a fun feature for people who really want to indulge in this game’s audio amusement. While the story, music, and acting all do their part to enhance this game’s enjoyment, it’s the fight that will keep players coming back for more.

Monster Monpiece ‘s fight is the shining star of the whole experience. The action this game focuses on is a multi-popular genre hybrid. This battle system is basically a combination of turn-based strategy and a CCG with JRPG elements. Try to imagine Magic: The Gathering or Hearthstone mixed with Fire Emblem’s battlefield elements in a more practical way. That’s where fun really begins.

As you progress through the game, you’ll collect monster-girl cards to create a deck for combat. Each card is split into several features that affect their battle actions. Each card has a type, ability, aura, assault power, health, and bonus stats that must be properly analyzed and used during combat to achieve victory. Each card is unique and boasts a specific set of skills as well as stylish, hand-drawn art; however, I wish each monster girl’s 3D character models were as distinctive as their corresponding cards. During battle, differentiating between characters can be difficult when you’re in a hurry as they look so similar. However, this is only a minor issue not detracting from the gameplay.

The battle goal is to reach and conquer the enemy’s base before your base is destroyed. The play-field has a base, playable area, neutral zone, and equally matched side of the opponent. When a match begins, the player starts with five cards. When the players turn, you’ll have the chance to play a card with the available points in your hand, or “Pass,” to collect more action points to play stronger cards. When playing a card, it can be placed on the player’s side anywhere. Each card can be used to attack, enhance, or merge with a similar card. After playing the card, that monster-girl will automatically act, whether that means defending a stationary position or moving forward to the castle of the enemy.

With all the specific aspects to account for when using each card, things can get even more complicated as the game adds more factors to the mix. On top of each playable card, players can also choose to use items during their turn, and these items can drastically change the course of a battle at any given moment. Health, mana, attacks, buffs, and debuffs can be applied to cards or the entire battlefield like any JRPG. Players will also have the chance to accept fighting challenges later in the game. These challenges may include enemy mana regeneration boosts or even a weakened base. These additions can add fun to any battle.

All this adds even more fun and challenge to Monster Monpiece’s already exciting fight. I should also say there is no need to worry about overflowing information. Monster Monpiece does a fantastic job with progressive tutorials teaching players how to handle all aspects of combat, deck management, and leveling. I love how Compile Heart developers took various battle systems that have been around for so long and turned them into something so fresh and entertaining.

Besides the great one-player experience, Monster Monpiece also features an online battling system that adds great value to the game. For those who prefer to stick to the story mode, this game provides a complete experience, but for those who want to test their online combat skills, it’s much more fun to have. In online combat, players will go head-to-head against each other to fight for trainer supremacy. Besides the swell of pride you get from a great victory, players will also be rewarded with Master Rings that can be exchanged for special items like rare card packs that can’t be found in the regular game store. While I had minor issues with loading during combat, overall I had a great time fighting online. Whatever you like, both single-player and multiplayer modes are fun and will keep players coming back for more.

With all this said, I have to address the one potential issue for many people looking to pick up this game, the sexual aspects of the card leveling system and animations. As I mentioned, during the battle, players will collect monster-girl cards to use. To make each card character stronger, the player must level each monster-girl through First Crush Rub training. The player will select a card to be leveled in these sessions and be prompted to turn their PS Vita sideways and display the selected monster-girl vertically.

When the leveling process begins, players need to rub, pinch, touch, or poke specific “weak points” on the monster-girl to make her feel good, raising the Tension Gauge to its maximum level. If multiple weak points are touched, the “Holy Touch” feature will be activated. During this time, players must quickly stroke Vita’s front and back to boost the leveling, listening to the monster-girls screaming phrases like, “It feels so good,” and, “Touch me there! “Once the gauge is maxed out, the card is successfully upgraded to the next level, and the monster girl gains more power and loses more clothes.

The question now becomes whether or not this particular feature will hinder people from playing Monster Monpiece. I honestly didn’t mind the card-leveling system or the artwork. It was a gut-busting, hilarious experience definitely distinguishing this franchise. For those who wonder about this game’s sexual impact, I’ll say it’s essentially non-existent for me. I was so focused on trying to figure out the right spots and actions to level the characters that there was no time to swallow or accommodate misconceptions. Actually, the only real problem I had was that my arm got tired when I tried to level numerous cards consecutively and I started sweating from the activity. This was because of the physical exertion, I swear.

That’s definitely something that will turn many people off Monster Monpiece, but it’s also something that will attract some niche group. Personally, there’s no problem with more adult-themed games coming west. With the wide range of film and television content available for any age group or genre, it should come as no surprise that video games eventually develop more mature content. While the adult content in Monster Monpiece may be entertaining to some, I ‘m worried that this is the best direction for this franchise to go in the future.

Monster Monpiece ‘s unique, creative experience is really quite extraordinary. While I support the developer’s decision to include comical, sexualized content, I also think that leaving this out of future iterations could help a much larger audience accept this franchise. Unfortunately, many people may not take the opportunity to play this game, because gameplay design is something special. I had a wonderful time playing Monster Monpiece anyway, and I’m excited to see what the future holds for this franchise. If you love card-battling games and JRPGs, and you don’t mind a heavy dose of animated sexual content, I definitely recommend Monster Monpiece to anyone looking for an entertaining, unique and bizarre experience.

Monster Monpiece is an extraordinarily entertaining creative experience. It has a fresh gameplay blend inspired by several popular gaming genres like Strategy RPGs, Collectible Card Games, and traditional JRPGs. If you love Japanese anime or games like Magic: The Gathering, Hearthstone, and Fire Emblem: Awakening (and if you don’t mind a heavy dose of animated sexual content), I definitely recommend Monster Monpiece to anyone seeking a compelling, unique, and bizarrely fascinating experience.